She became Yorkshire’s first female chef to hold a Michelin star, but as the Yorke Arms in Nidderdale closes as a restaurant Frances Atkins is starting a new adventure. Catherine Scott meets her.

Frances Atkins and the Yorke Arms at Ramsgill have been synonymous with fine dining in Yorkshire for decades. But as a result of the coronavirus, owner Jonathan Turner made the shock decision not to reopen the former Michelin starred restaurant with rooms. Instead it is being reinvented as a country house for hire. The big question on everyone’s lips was what would that mean for Atkins – who owned the Yorke Arms for 20 years until selling it to Turner in 2017?

It has been a turbulent time for Atkins who decided to stay and work with Turner when he invested in the Yorke Arms, but last year lost the Michelin star she had held for 16 years.

Ever the optimist, Atkins managed to turn this devastating blow into a positive, seeing it as an ‘‘opportunity’’. The same goes for the closure of the Yorke Arms – in fact, she seems reinvigorated and excited about the future.

“We knew when lockdown happened that everything was going to be different even when restaurants could open again – and it has been. This is time for a change and although I have had two happy years working with Jonathan it is time for us to go our separate ways. We were very lucky to sell it to somebody like Jonathan who has a great love of Yorkshire and cares about the place and that meant everything.

“One of the joys of being a chef, especially a creative chef, is knowing when it is time to move on. I am happy that I can look back in a positive way, and now look forward to new and exciting challenges.”

She has gone into business with two of her Yorke Arms colleagues – Roger Olive and John Tullett – to create Paradise, a catering and lifestyle brand, due to launch today.

“Paradise Food is a unique brand of three professionals who have worked closely together for 20 years sustaining excellence and consistency within the hospitality sector,” explains Atkins.

They will be based from a smart Airstream caravan that has been converted into a food wagon, where they will serve passing trade or pre-booked orders either to eat straight away or to take home. “I’m not keen on the term takeaway,” she says. “We will have weekly menus, all seasonal and locally grown and of the best quality. People can call in on their way home from Harrogate and just see what we’ve got or call and pre-order.”

The mobile kitchen will be situated at Daleside Nurseries in Killinghall near Harrogate – but is movable and so can attend other venues.

“We have a great relationship with Daleside Nurseries and we are lucky that we have access to all the amazing produce they grow there. My food is all about being simple and seasonal – and always has been really.”

It means Paradise can cater for dinner parties in people’s homes or places of work for everything from breakfast meetings to impressive and innovative private dining.

“We can even organise everything from butler service to internal floral decorations – simply everything to do with quality and stylish lifestyle, all come under the Paradise umbrella,” says Atkins, who is clearly looking forward to the new venture.

“The coronavirus pandemic has changed the hospitality sector for the foreseeable future. Some people are still nervous about eating out. It is all about consumer confidence. But it is also about price. Fine dining is all about giving people an experience to remember, that is very difficult with the new covid regulations and it also makes it difficult to make any money due to social distancing.

“The hospitality sector has been so badly hit by the lockdown and now no-shows, which has always been a problem, seem to be getting worse and the industry really needs to look at that.

“Our aim is to give people the same quality but in their own homes or their choice of venue.

“It may be that people want a few friends round and want a simple supper or they may want a bespoke dinner – it doesn’t matter. They can pick it up or we can deliver. It just takes all the stress out of it.”

It will seem strange seeing Atkins cooking in a ‘food wagon’ creating street food with a difference, rather than in her Michelin-starred kitchen or wandering around the Yorke Arms’ stunning kitchen garden looking for inspiration for yet another culinary masterpiece.

As a little girl Atkins dreamed of having her own cafe which developed into a desire to have her own fine-dining restaurant.

After completing a hotel management course at Bradford College, she cut her teeth in the male-dominated environment of the Box Tree in Ilkley where the likes of Marco Pierre White learnt their trade.

She then moved to Scotland and Denmark where she lived for two years. But when she married her first husband George Carmen at the age of 23 her career came to an abrupt halt. “For ten years I didn’t work, which was terrible,” recalls Atkins, admitting that her first marriage was a “disaster”.

When her marriage broke down, she started running an outside catering company from home to earn enough money to open her own cafe.

She met and married her second husband Bill Atkins in 1984 and opened Atkins Restaurant in Buckinghamshire, followed by ventures in London and Scotland. But she was desperate to return to Yorkshire and when they found a pub in the beautiful North Yorkshire village of Ramsgill they decided to buy it, eventually turning it from good pub food to a fine dining restaurant which gained a Michelin star in 2003 – making Atkins the first woman in Yorkshire to hold the accolade. It propelled her and her restaurant into the elite of the country’s top restaurants and television appearances followed. But Atkins has always kept her feet firmly on the ground and let her food do the talking. She can often be seen alongside James Martin and on Saturday Kitchen although an appearance on the Great British Menu was one she doesn’t want to repeat, finding it stressful and confrontational.

There may be some who thought she might hang up her oven gloves for good. “Not a bit of it,” says Atkins forcefully. “Being a chef is my life and I love it. I have never said anything else.”

Leaving the Yorke Arms is going to be difficult, although Atkins says she would be happy to cater for any events there.

She lives in a pretty cottage across a small green opposite her former business, but she seems pragmatic. “At the end of the day it is a business and there is no place for emotion in business – my husband taught me that. You have to separate your emotion from your business decision,” she says, perhaps more to convince herself than anyone else. 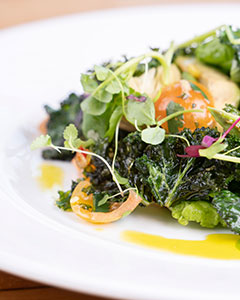 Early May Bank Holiday Opening Times: We are open on Monday 2nd May. Closed Tuesday 3rd May.

During these closure dates we will be offering limited refreshments!